The Norwegian writer Knut Hamsun (1859-1952), dedicated the Nobel Prize in 1920, has written more than 50 works of art in his lifetime, most of which are translated into english. 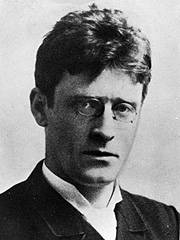 Knut Hamsun is among the most important and influencial European writers in the last century. He is both novelist, dramatist, and poet, and won the Nobel Prize for Literature in 1920.

Among Hamsun’s most famous novels is Hunger, an intense story of a starving writer, which has attracted readers since its publication in 1890. Also worth mentioning on this short note are his novels “Pan”, “Mysteries” and “Growth of the Soil”. See all his books here.

You will also find quotes, galleries of photos, covers and portraits.

As one man stopped and set me to rights rather sharply for my behaviour, I turned round and screamed a single meaningless word in his ear, clenched my fist right under his nose, and stumbled on, hardened by a blind rage that I could not control.